Ledbury Park’s reputation as a hub for the well-to-do has remained unchanged throughout much of its history.

Ledbury Park’s streetscape is dominated by large, elegant homes and peaceful, traffic-free residential streets. Bathurst Street and Avenue Road serve as the neighborhood’s commercial and retail hubs, with independently-owned shops and restaurants predominating. In addition, several large retailers have locations in Lawrence Plaza, located just outside Ledbury Park and easily accessible from anywhere within it. While single-family homes form the vast majority of the neighborhood’s residential options, luxury condominiums have begun to establish a presence here.

Frequent bus service is available along Bathurst Street, Lawrence Avenue, Wilson Avenue and Avenue Road, with Lawrence and Wilson also featuring express routes. All routes connect to subway stations on either Line 1 Yonge-University or Line 2 Bloor-Danforth. For regional connections, bus terminals at Yorkdale Mall and York Mills station are served by numerous GO Transit routes, as well as featuring Greyhound and Ontario Northland service. Highway 401 runs along the northern edge of Ledbury Park, and is easily accessible via entrances/exits at Bathurst Street and Avenue Road. Allen Road is also nearby, and provides a time-saving connection to both the 401 and into Downtown Toronto. 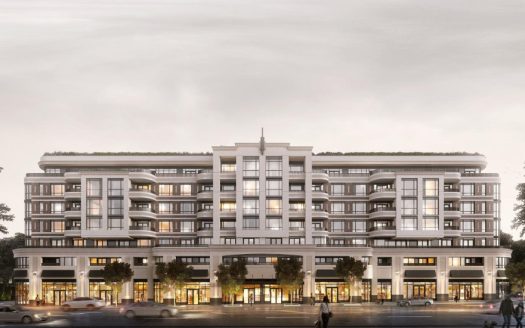