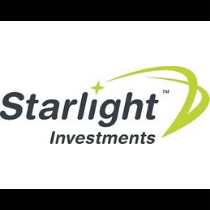 Starlight Investments was founded in 2011. Since then, the company has expanded its presence outside of Ontario, first in the Southern United States and then into the rest of Canada. As its name suggests, Starlight is primarily focused on providing high returns-on-investment for buyers both large and small. The company has assembled an extensive portfolio of both residential and commercial properties that it has developed and managed.

The Huron. This new community is situated along Hurontario Street between Dundas Street West and The Queensway. Residents of The Huron will have direct access to the new Hurontario LRT upon its opening in 2024. Building amenities include a rooftop lounge, a fitness centre, barbecue areas and a yoga studio.