Gairloch Developments was founded by Bill Gairdner, who started the company after six years with Freed Developments. While at Freed, Mr. Gardiner oversaw the design and construction of several award-winning condominium projects throughout Downtown Toronto-and has brought those same standards of innovation and quality to Gairloch. The company has made infill projects in well-established neighborhoods throughout Toronto their top priority, and aim to design buildings that fit seamlessly into their surroundings while also adding a bit of flair to them. Additionally, all of Gairloch’s projects are mixed-use, ensuring that they contribute to vibrant streetscapes and a more pedestrian-friendly environment for local residents.

383 Sorauren Condos. Rising to a height of 10 storeys and including 142 condominium units, 383 Sorauren was completed in 2016. Residents are within walking distance of multiple streetcar routes (namely the #504 King, #505 Dundas and #506 Carlton), both High Park and Sorauren Avenue Park, and the charming Roncesvalles Village commercial district. From the nearby Bloor GO/UP station, Pearson Airport can be reached in under 30 minutes, while cyclists can take advantage of the West Toronto Railpath, which provides a bike path as far north as Dupont Street. Inside the building, available amenities include a lounge, an exercise room and a guest suite. 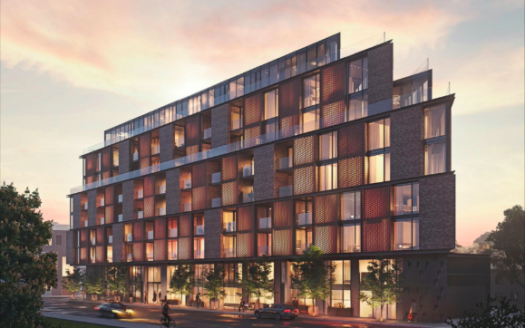